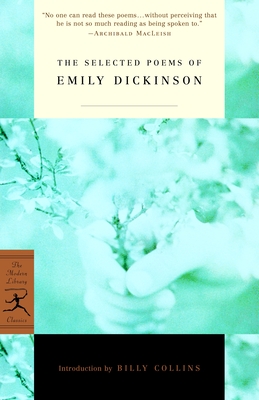 Emily Dickinson lived as a recluse in Amherst, Massachusetts, dedicating herself to writing a "letter to the world"--the 1,775 poems left unpublished at her death in 1886. Today, Dickinson stands in the front rank of American poets. This enthralling collection includes more than four hundred poems that were published between Dickinson's death and 1900. They express her concepts of life and death, of love and nature, and of what Henry James called "the landscape of the soul." And as Billy Collins suggests in his Introduction, "In the age of the workshop, the reading, the poetry conference and festival, Dickinson reminds us of the deeply private nature of literary art."

Virtually unknown as a poet in her lifetime, Emily Dickinson (1830–1886) is now recognized as one of the most unaccountably strange and marvelous of the world’s great writers. Unique in their form, their psychic urgency, and their uncanny, crystalline power, her poems represent a mind unlike any other to be found in literature.

Billy Collins is the author of twelve collections of poetry, including The Rain in Portugal, Aimless Love, Horoscopes for the Dead, Ballistics, The Trouble with Poetry, Nine Horses, Sailing Alone Around the Room, Questions About Angels, The Art of Drowning, and Picnic, Lightning. He is also the editor of Poetry 180: A Turning Back to Poetry, 180 More: Extraordinary Poems for Every Day, and Bright Wings: An Illustrated Anthology of Poems About Birds. A Distinguished Professor of English at Lehman College of the City University of New York and Senior Distinguished Fellow at the Winter Park Institute of Rollins College, he was Poet Laureate of the United States from 2001 to 2003 and New York State Poet from 2004 to 2006. In 2016 he was inducted into the American Academy of Arts and Letters.

"No one can read these poems...without perceiving that he is not so much reading as being spoken to."
--Archibald MacLeish