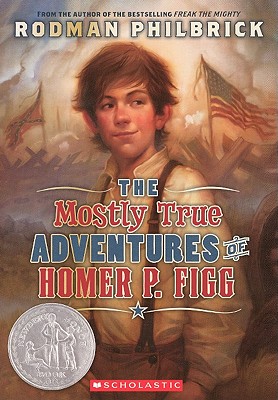 Master storyteller Rodman Philbrick takes readers on a colorful journey as young Homer Figg sets off to follow his brother into the thick of the Civil War. Through a series of fascinating events, Homer's older brother has been illegally sold to the Union Army. It is up to Homer to find him and save him. Along the way, he encounters strange but real people of that era: two tricksters who steal his money, a snake-oil salesman, a hot-air balloonist, and finally, the Maine regiment who saved Little Round Top at the Battle of Gettysburg and won the war for the Union. (copy continues)

These historical people and places will educate and engage young readers about our nation's past--in one of the most decisive moments of American history. In Homer's inspiring fight to track down his brother, Philbrick brings us another groundbreaking novel.

Funny, poignant, entertaining, and tragic, The Mostly True Aadventures of Homer Figg will be embraced and heralded by readers and reviewers alike. A magnificent novel by one of the best fiction writers of our century.