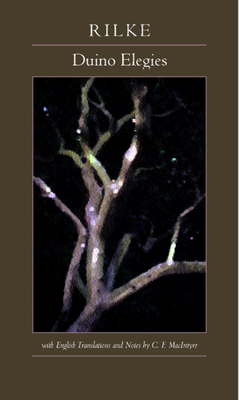 Begun in 1912 at the castle of Duino near Trieste, these ten Elegies were finally completed, after a decade of sporadic and protracted creation, at the Château Muzot in the Swiss Valais. Rilke considered them his greatest achievement, and, as MacIntyre suggests, they are "among the great and unforgettable poetry of the world."

Rainer Maria Rilke was one of Germany's most important poets. His influences include the paintings of the Worpswedders and the French Impressionists, the sculpture of Rodin (to whom he was both friend and secretary), and the poetry of Baudelaire, Verlaine, Mallarmé, and other symbolists. His poetry is innovative, enigmatic, and entertainingly idiosyncratic. C.F. MacIntyre's translations are both true to the original and poetic in their own right, and in each book he includes an introduction and notes. German text faces the English translation.

C.F. MacIntyre (d.1967) was well known as a translator. In addition to works by Rilke, he translated Goethe's Faust and many of the French symbolists: Nerval, Baudelaire,Verlaine, Corbière, Mallarmé, Rimbaud, Laforgue, and Valéry. His volumes of original poems include The Black Bull, Cafés and Cathedrals, and Poems.