Woman Suffrage and Politics: The Inner Story of the Suffrage Movement (Paperback) 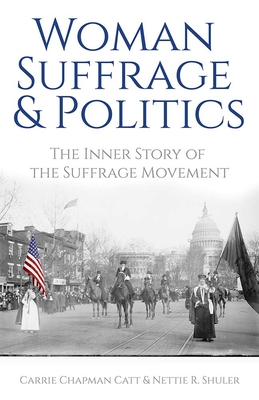 "A political combat memoir like no other, suffrage leader Carrie Chapman Catt takes us to the front lines of the Votes for Women battlefields -- in the states and in Congress -- as American women fight for the franchise. With candor and flashes of wry humor, Catt offers sharp insights into the social, political, and economic forces arrayed against her cause, revealing the strategies that finally brought the suffragists' seven-decade campaign to dramatic victory. Woman Suffrage and Politics is not only a fascinating firsthand account of a major civil rights struggle, but a valuable guidebook for today's political activists." -- Elaine Weiss, author of The Woman's Hour Carrie Chapman Catt, founder of the League of Women Voters and the International Alliance of Women, was a leader of the women's suffrage movement and a tireless campaigner for giving women the right to vote. She and suffragist Nettie Rogers Shuler reveal the inside story of the struggle from 1848 to 1922.
Catt and Shuler propose that rather than a lack of public support for woman suffrage, the movement was stymied by certain interests in the U.S. political system that controlled public sentiment and deflected information in order to delay the Nineteenth amendment's passage. They note that 26 other countries gave women the right to vote before the United States, and they offer their own insights as to why.
As 2020 marks the 100th anniversary of the amendment's ratification, this landmark work forms an important aid to understanding how the battle was won and the extensive debt we owe to those who fought it.

Carrie Chapman Catt (1859-1947) was a leader of the American women's suffrage movement who campaigned for the ratification of the 19th Amendment, which gave women the right to vote. She was the founder of the League of Women Voters and of the International Alliance of Women.