Darker After Midnight (with bonus novella A Taste of Midnight): A Midnight Breed Novel (Mass Market) 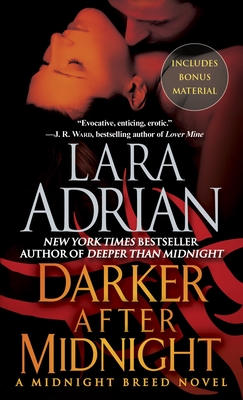 By Lara Adrian
$9.89
Not currently available - email or call for details

This is book number 10 in the Midnight Breed series.

The climactic novel in the bestselling Midnight Breed series, of which BookPage raves: “If you like romance combined with heart-stopping paranormal suspense, you’re going to love this book.”

In the dark of night, a blood war escalates within the hidden world of the Breed. After maintaining a fragile peace with the humans who walk beside them unaware, a single act of retaliation has put the vampire nation at risk of discovery. It falls to the Order—a cadre of Breed warriors pledged to protect their own and humankind alike—to stop Dragos, the power-mad vampire, before his push for domination explodes into catastrophe.

At the center of the Order’s quest is Sterling Chase, whose biggest battle is the one he wages against his own savage nature. But when his eyes meet those of Tavia Fairchild, Chase finds himself drawn to the woman—and convinced she is something much more than she seems. And while everything logical warns Tavia against getting close to Chase, she cannot deny that he stirs something ravenous within her. As the Order’s enemy mobilizes for the battle of the ages, Chase and Tavia are thrust into the heart of the violence. With time running out, they must find a way to defeat Dragos once and for all—or die trying.

“Stunning . . . filled with passion, treachery, and danger . . . Adrian pulls out all the stops.”—RT Book Reviews

“A fast-paced tale of romantic suspense and intense realistic characters . . . Adrian compels people to get hooked on her storylines.”—Romance Reviews Today, on Shades of Midnight

“An entertaining ride and as usual kept me riveted from page one.”—The Romance Reader Connection, on Ashes of Midnight

“Will enthrall you and leave you breathless for more.”—Wild on Books, on Veil of Midnight

“Packed with danger and action . . . Adrian has hit upon an unbeatable story mix.”—RT Book Reviews, on Midnight Rising