Embodied Acting: What Neuroscience Tells Us About Performance (Paperback) 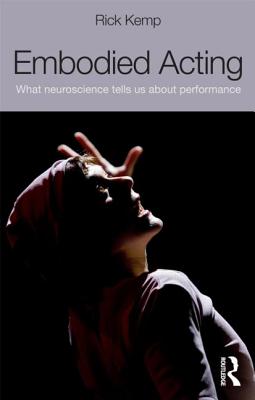 By Rick Kemp
Not currently available

'A focus on the body, its actions, and its cognitive mechanisms identifies ... foundational principles of activity that link the three elements of theatre; Story, Space, and Time. The three meet in, are defined by, and expressed through the actor's body.' - from the Introduction

Embodied Acting is an essential, pragmatic intervention in the study of how recent discoveries within cognitive science can - and should - be applied to performance. For too long, a conceptual separation of mind and body has dominated actor training in the West. Cognitive science has shown this binary to be illusory, shattering the traditional boundaries between mind and body, reason and emotion, knowledge and imagination. This revolutionary new volume explores the impact that a more holistic approach to the "bodymind" can have on the acting process.

Drawing on his experience as an actor, director and scholar, Rick Kemp interrogates the key cognitive activities involved in performance, including:

New perspectives on the work of Stanislavski, Michael Chekhov, and Jacques Lecoq - as well as contemporary practitioners including Daniel Day-Lewis and Katie Mitchell - are explored through practical exercises and accessible explanations. Blending theory, practice, and cutting-edge neuroscience, Kemp presents a radical re-examination of the unconscious activities engaged in creating, and presenting, a role.

Rick Kemp (aka Rick Zoltowski) has worked as an actor and director with companies such as the Almeida, Complicite, Commotion, Quantum, and Squonk Opera. He holds an MA from Oxford University, an MFA and a PhD from the University of Pittsburgh, and teaches at Indiana University of Pennsylvania, USA.