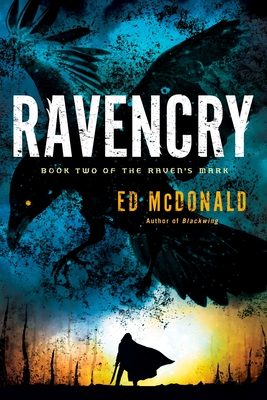 In the second gritty installment of the Raven's Mark series, a bounty hunter faces down the darkest evil.

Ryhalt Galharrow is a blackwing--a bounty hunter who seeks out and turns over any man, woman, or child who has been compromised by the immortals known as the Deep Kings. Four years have passed since he helped drive the Deep Kings back across the Misery. But new and darker forces are rising against the republic...

“Blackwing quickly gained the rare distinction of being one of those books that felt as if it had been written especially for me...Ed McDonald handles the action with a deft hand and has created a compelling central character who remains likeable despite a lengthy list of flaws.”—Anthony Ryan, New York Times bestselling author of The Legion of Flame

“Blackwing is a bloody, gritty fantasy novel that manages not to sacrifice its heart.  I love the world, which feel strange and lived-in, and the strength of the voice is fantastic. Fans of Glen Cook’s The Black Company or Joe Abercrombie’s The First Law series will be very happy with this one.”—Django Wexler, author of The Guns of Empire

“Vivid characters, visceral combat and a twist of an ending that I really should have seen coming and didn’t...Suffice to say, I bloody loved it and I am officially an Ed McDonald fan. He deserves to go far.”—Elspeth Cooper, author of The Songs of Earth

“Gritty and immersive, Blackwing is a hugely enjoyable tale.”—Edward Cox, author of The Watcher of Dead Time