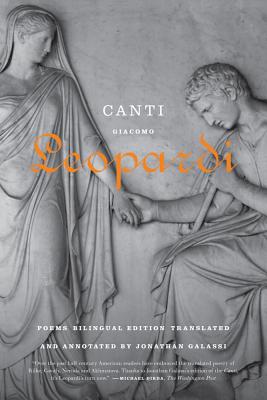 Giacomo Leopardi is Italy's greatest modern poet, the first European writer to portray and examine the self in a way that feels familiar to us today. A great classical scholar and patriot, he explored metaphysical loneliness in entirely original ways. Though he died young, his influence was enormous, and it is no exaggeration to say that all modern poetry, not only in Italian, derives in some way from his work.

Leopardi's poetry is notoriously difficult to translate, and he has been less well known to English-language readers than his central significance for his own culture might suggest. Now Jonathan Galassi, whose translations of Eugenio Montale have been widely acclaimed, has produced a strong, fresh, direct version of this great poet that offers English-language readers a new approach to Leopardi. Galassi has contributed an informative introduction and notes that provide a sense of Leopardi's sources and ideas. This is an essential book for anyone who wants to understand the roots of modern lyric poetry.

Giacomo Leopardi was born in Recanati, a small town in the Italian Marches, in 1798. Renowned in his youth as a classical scholar, he suffered from poor health all his life and never experienced happiness in love. He visited Rome, Bologna, and Florence, but never fully broke away from his family, until in his last years he finally moved with a friend to Naples, where he died in 1837. He is the author of Zibaldone.

“Like no other poet, Leopardi captures the subtlest sensations, just before they vanish. His language itself works as a vanishing act: it serves up all the richness of antiquity – gained from years spent steeping in Horace and Virgil – even as tones of skepticism and bitterness begin to eat away at that richness. What makes Jonathan Galassi's translation of Leopardi's poetry so superb is that he understands, and renders, that delicate movement of thought and feeling. Galassi, the author of a magnificent translation of Eugenio Montale's poetry as well as two collections of his own poems, brings Leopardi's "Canti" alive by virtue of a flexible and unpretentious English idiom. Galassi, who is also the president and publisher of Farrar, Straus and Giroux, strives for accuracy throughout, but above all he works to make his translations living poems. The diction in these versions rightly conjures the 19th century, but never smells of a wax museum … The publication, at last, of a definitive English version of the "Canti" should constitute an event in itself. But this book does something even greater … Now, [Leopardi] may become as important to our own literature as, say, Baudelaire or Rilke, poets of comparable genius, whose work has long been available in fine translations … When the otherwise authoritarian Count Monaldo Leopardi opened his library to his preadolescent son, and allowed the boy to spend whole days there, that small permission changed world literature for good. Who knows? The next great American poet may be a high school girl in Wyoming lucky enough to come across Jonathan Galassi's translation in her own school library.” —Peter Campion, The New York Times Book Review

“Over the past half-century American readers have embraced the translated poetry of Rilke, Cavafy, Neruda and Akhmatova. Thanks to Jonathan Galassi's edition of the "Canti," it's Leopardi's turn now.” —Michael Dirda, The Washington Post

“Because the bitterness of the thoughts in Leopardi's poems is redeemed primarily by the sweetness and purity of the language--what Galassi calls his "impenetrably perfect, sonorous expressiveness"--he presents an unusual challenge for the translator. He is one of those poets who are often said to be untranslatable, and it is remarkable how little he figures in the consciousness of English readers, compared with, say, Baudelaire or Hölderblin...In the face of this challenge, Galassi--who, in addition to being a poet and a translator, is the head of the publishing house Farrar, Straus & Giroux--has taken the tactful and intelligent approach of translating primarily for sense, rather than trying to re-create Leopardi's metres and rhymes.” —Adam Kirsch, The New Yorker

“With the help of his detailed notes--he seems to have read everything about Leopardi in several languages--Mr. Galassi's versions offer the reader without Italian the surest possible grasp of Leopardi's poems.” —Eric Ormsby, The Wall Street Journal

“Galassi grants the impossibility of transferring Leopardi's musicality into English, yet his versions often have their own swing to them, and they always verify the depiction of Leopardi in the introduction as a discouraged but genuine patriot and a philosophical hapless lover. They reflect, too, the romantic displacement of devotion from God to nature, the distrust of science, the exaltation of eros, and the despair of meaningful change that Matthew Arnold's English harbinger of modernism, "Dover Beach," attests. An absorbing presentation of a literary giant.” —Booklist

“Leopardi's most lasting imprint on literature was made by his poetry, begun at the age of eighteen. It is a body of work charged on the one hand with a helpless longing, both sexual and philosophical, and on the other hand by a bitterness that was both personal and political…Since so many of Leopardi's poems are paralleled in his prose, the reader is grateful for Galassi's hundred pages of generous and helpful notes, which do not merely clarify allusions, explain myths, identify landscapes, and so on, but also reproduce (as do Italian critical editions of the poet) comparable passages extracted from the copious prose.” —Helen Vendler, The New Republic

“A towering figure among European Romantic poets and a national hero of Italian letters, the tormented, learned, sometimes hyperbolic Leopardi (1798–1837) has inspired other writers--and defied translators--since before his early death: the 41 elegies, odes, love poems, and meditations called Canti lie at the heart of his work . . . To Leopardi's elaborate stanzas Galassi (who has also translated Montale) brings a light touch and a feel for modern speech. This bilingual version comes with copious notes aimed at beginners, informed, but not overwhelmed, by Italian scholarship.” —Publishers Weekly

“[Galassi] has a remarkable ear for the dignified pacing of the original, so that I think anyone with even a little knowledge of Italian pronunciation could look over to the left-hand side of the page and catch something of Leopardi's stately severity. I tend to agree with W. S. Merwin's opinion that Galassi's will be the ‘standard version for the language of our time.' As in his Montale translations, Galassi has a knack for finding the least deviation from the literal meaning that will please an Anglophone ear.” —Alan Williamson, Los Angeles Review of Books

“For 175 years, English-language readers have been hearing about the greatness of Leopardi's Canti. Now we know why, for at last there is a translator who is up to the task.” —Eliot Weinberger

“With this carefully annotated version of the entire Canti--along with Flowers of Evil and Leaves of Grass the most influential poetic collection of the nineteenth century--we have at last not only an excuse but an obligation to read the fiercely learned but also fiercely intimate productions of a great writer whose energies were exhaustively distributed among classical translations, philological studies, and philosophical dialogues. Yet it is these poems that establish the passion and the power of this Italian master, so properly as well as poignantly given here by Jonathan Galassi. What a privilege as well as a joy finally to claim Leopardi, along with Baudelaire and Whitman, for one's own.” —Richard Howard

“‘Beyond the borders of Italy,' lamented Italo Calvino years ago, ‘Leopardi simply doesn't exist. There is no way of conveying who he is, no way of defining him in relation to others, or of conveying why he is so important for us . . .' But now, with Jonathan Galassi's lucid translation and informative commentary, Leopardi the poet at last begins to take on palpable existence for the English reader. On one level, Leopardi, like Pindar orMallarmé or Celan, will always be untranslatable, because his haunting music and idiosyncratic language cannot be transported; but in other respects, Galassi's splendid new achievement will, for the non-Italian reader, provide an entry into the incomparable world of one of the greatest lyric poets of the nineteenth century.” —Walter Kaiser

“Ever since the age of the great Romantics, the poetry and the lifework of Giacomo Leopardi have remained a kind of enchanted garden in the landscape of Italian poetry. What we have come to know of his dedication, his learning, his circumstances, has all contributed to the mysterious beauty of that garden. His language, rooted in the classics and in the romantic spirit of his age, informs both the beauty and the ineffability of his work. Its distinctive tenor has not proven easy to translate, and for those of us whose first language is English, Jonathan Galassi's long labor of love with Leopardi's poetry is a welcome gift. His translations convey, to an astonishing degree, the tone, the delicacy and depth, the intimacy and passion, of the great originals, making them seem like recent discoveries. The Italian texts are provided on facing pages, and the combination, I expect, will make this a standard version for the language of our time.” —W. S. Merwin