Mankiller: A Chief and Her People (Paperback) 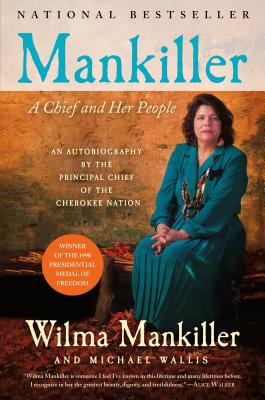 In this spiritual, moving autobiography, Wilma Mankiller, former Chief of the Cherokee Nation and a recipient of the Presidential Medal of Freedom, tells of her own history while also honoring and recounting the history of the Cherokees. Mankiller's life unfolds against the backdrop of the dawning of the American Indian civil rights struggle, and her book becomes a quest to reclaim and preserve the great Native American values that form the foundation of our nation. Now featuring a new Afterword to the 2000 paperback reissue, this edition of Mankiller completely updates the author's private and public life after 1994 and explores the recent political struggles of the Cherokee Nation.

Wilma Mankiller was Chief of the Cherokee Nation for over ten years. She lives in Oklahoma.

Michael Wallis is an award-winning historian of the Old West and author of Route 66: The Mother Road and several other books, and the co-author of Mankiller: A Chief and Her People. He lives in Tulsa, Oklahoma, and Sante Fe, New Mexico.

“Autonomy is achieved, Mankiller teaches us, only when it happens simultaneously in the life of the individual and the life of a people.” —Susan Faludi

“Here is a strong and well-told story of survival and it is told with honesty and eloquence.” —N. Scott Momaday

“Chief Mankiller tells a story of a modern tribe that is carrying the Cherokee traditions into the future.” —U.S. Senator Ben Nighthorse Campbell

"Mankiller broke all the rules as we knew—and, to some extent, still know—them. A visionary politician and activist with a gentle but determined manner, she offers a model of female leadership more inspirational than ever."—Vogue

“Wilma Mankiller is someone I feel I've known in this lifetime and many lifetimes before. I recognize in her the greatest beauty, dignity, and truthfulness.” —Alice Walker

“As one woman's journey, Mankiller opens the heart. As the history of a people, it informs the mind. Together, it teaches us that, as long as people like Wilma Mankiller carry the flame within them, centuries of ignorance and genocide cannot extinguish the human spirit.” —Gloria Steinem

“[Wilma Mankiller] is a colorful, intelligent advocate for all of America's indigenous peoples.” —The Boston Globe