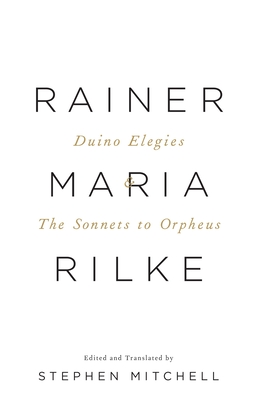 Available for the first time in a single volume, Ranier Maria Rilke’s two most beloved sequences of poems rendered by his most faithful translator. Rilke is unquestionably the twentieth century’s most significant and compelling poet of romantic transformation and spiritual quest. His poems of ecstatic identification with the world exert perennial fascination. In Stephen Mitchell’s versions of Rilke’s two greatest masterpieces readers will discover an English rendering that captures the lyric intensity, fluency, and reach of his poetry. Stephen Mitchell adheres impeccably to Rilke’s text, to his formal music, and to the complexity of his thought; at the same time, Mitchell’s work has authority and power as poetry in its own right.

Rainer Maria Rilke (1875-1926) is one of the greatest lyric German poets. Born in Prague, he published his first book of poems, Leben und Lieber, at age nineteen. He met Lou Salomé, the talented and spirited daughter of a Russian army officer, who influenced him deeply. In 1902 he became the friend, and for a time the secretary, of Rodin, and it was during his twelve-year Paris residence that Rilke enjoyed his greatest poetic activity. In 1919 he went to Switzerland where he spent the last years of his life. It was there that he wrote his last two works, Duino Elegies (1923) and The Sonnets to Orpheus (1923).

About the Translator:
Stephen Mitchell was born in Brooklyn in 1943 and studied at Amherst, the University of Paris and Yale. Considered one of the preeminent translators of his generation he has translated many classic texts including Gilgamesh, The Bhagavad Gita, Tao Te Ching and the Book of Job.

“Stephen Mitchell’s translation of Rilke’s most demandingly difficult and loveliest work instantly makes every other rendering obsolete. No doubt about it, Rilke has at last found, in Mr. Mitchell’s version, the ideal poetics and the perfect translator.” —William Arrowsmith

“The gifts Mr. Mitchell brought to his earlier book he also brings to this one – an eye for a strong line; a sympathetic tact that allows him to supply a word from what is only suggested or to swell one of Rilke’s almost subliminal, one-word metaphors into a whole English phrase; the ability to reproduce the tone of common speech in Rilke; a knack for ingeniously simple versions of certain crucial Rilkean terms; and the use of off-rhymes to solve the formal problems of translating these “conjugated” sonnets. At times, Mr. Mitchell’s versions actually enhance the original... This is a beautifully designed, elegant and spacious volume, and it is splendidly annotated.” —Michael Hofmann, The New York Times Book Review

“Stephen Mitchell’s translations are masterful re-creations of the original, giving both precise renderings of Rilke’s language and sensitive interpretations of his poetic intent.” —Library Journal

“An undisputed masterpiece by one of the greatest modern poets, translated here by a master of translation.” —Village Voice Literary Supplement

“Perhaps the most beautiful group of poetic translations [the twentieth] century has produced.” —The Chicago Tribune

“Rilke almost always converts the energies of thought into telling images. In accomplishing this most impressive ‘imaging’ in English, Stephen Mitchell proves his mastery of the art of translation. . . . This is, without any doubt, the best English rendering of Rilke. It is as faithful to the original as the translation of poetry can hope to be, faithful not only to its linguistic meaning but to its poetic expressiveness.” —Erich Heller, Poetry

“Stephen Mitchell’s translations bring the qualities that I most cherish in the originals into English with new intimacy and authority. Rilke’s voice, with its extraordinary combination of formality, power, speed and lightness, can be heard in Mr. Mitchell’s versions more clearly than in any others. His work is masterly.” —W. S. Merwin

“Mitchell’s translation of the Duino Elegies–Rilke’s masterpiece–is the best that has been made. . . . Intensely readable, yet he has not simplified the ideas.” —Stephen Spender, The New York Review of Books

“Stephen Mitchell treats English with courtesy, is forceful without forcing any issue and gains his ends by propriety of persuasion. . . . It is easy to feel that if Rilke had written in English, he would have written in this English.” —Denis Donoghue, The New York Times Book Review