The Iliad of Homer (Paperback) 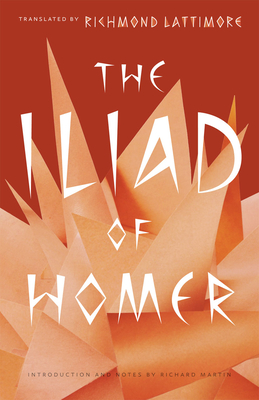 "Sing, goddess, the anger of Peleus’ son Achilleus / and its devastation." For sixty years, that's how Homer has begun the Iliad in English, in Richmond Lattimore's faithful translation—the gold standard for generations of students and general readers.

This long-awaited new edition of Lattimore's Iliad is designed to bring the book into the twenty-first century—while leaving the poem as firmly rooted in ancient Greece as ever. Lattimore's elegant, fluent verses—with their memorably phrased heroic epithets and remarkable fidelity to the Greek—remain unchanged, but classicist Richard Martin has added a wealth of supplementary materials designed to aid new generations of readers. A new introduction sets the poem in the wider context of Greek life, warfare, society, and poetry, while line-by-line notes at the back of the volume offer explanations of unfamiliar terms, information about the Greek gods and heroes, and literary appreciation. A glossary and maps round out the book.

The result is a volume that actively invites readers into Homer's poem, helping them to understand fully the worlds in which he and his heroes lived—and thus enabling them to marvel, as so many have for centuries, at Hektor and Ajax, Paris and Helen, and the devastating rage of Achilleus.

Richmond Lattimore (1906–1984) was a poet, translator, and longtime professor of Greek at Bryn Mawr College. Richard Martin is the Antony and Isabelle Raubitschek Professor in Classics at Stanford University.

"Both lucid and learned, Lattimore writes with a certain grace, capturing the combination of nobility and speed which over 100 years ago Matthew Arnold famously heard in Homer’s work. . . . Read Richmond Lattimore's translation for the epic scale and narrative of Homer's poem."

"Martin's introduction surpasses all rivals. . . . Lattimore's Iliad is best for those who want to feel the epic from the loins up, its rush, its reprieves, and its overwhelming rage."
— Chronicle of Higher Education

“I had an invaluable and inspiring high school teacher, Robert Cooley, who introduced me to both Lattimore's The Iliad and The Odyssey during my senior year. It was my first experience with the power of drama and poetry combined. Little did I know that I would spend the rest of my life (especially professionally) searching for experiences that would be as satisfying. The fact that I fell in love for the first time with the guy sitting next to me didn’t hurt my journey through those books either.”
— Laura Linney