The Nibelungenlied: The Lay of the Nibelungs (Oxford World's Classics) (Paperback) 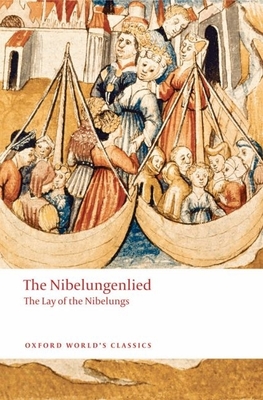 The greatest of the heroic epics to emerge from medieval Germany, the Nibelungenlied is a revenge saga of sweeping dimensions. It tells of the dragon-slayer Sivrit, the mysterious kingdom of the Nibelungs, a priceless treasure guarded by dwarves and giants, an Amazonian queen, fortune-telling
water-sprites, and a cloak of invisibility. Driven by the conflict between Kriemhilt, the innocent maiden turned she-devil, and her antagonist, the stoic, indomitable Hagen, the story is one of love, jealousy, murder, and revenge, ending in slaughter on a horrific scale. Since its rediscovery in
the eighteenth century, the Nibelungenlied has come to be regarded as the national epic of the Germans, and has inspired countless adaptations, including Richard Wagner's Ring cycle. Cyril Edwards' prose translation, the first in forty years, is more accurate and accessible and captures the poem's
epic qualities. Edwards also provides an introduction that discusses the poem's historical background and its status as German national epic. The volume includes an up-to-date bibliography, invaluable notes, a map, and a list of people and places. About the Series: For over 100 years Oxford World's Classics has made available the broadest spectrum of literature from around the globe. Each affordable volume reflects Oxford's commitment to scholarship, providing the most accurate text plus a wealth of other valuable features, including expert
introductions by leading authorities, voluminous notes to clarify the text, up-to-date bibliographies for further study, and much more.