Lincoln in His Own Words (Paperback) 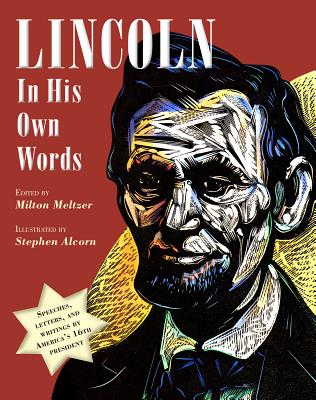 Milton Meltzer (1915–2009) was the author of 110 books, five of which were nominated for the National Book Award. With Langston Hughes, he coauthored A Pictorial History of African Americans, now in its sixth edition. He received the 2001 Laura Ingalls Wilder Award for his contribution to children's literature, the 1986 Jane Addams Peace Association Children's Book Award, and the 2000 Regina Medal. He lived in New York City.

Stephen Alcorn is an acclaimed painter and printmaker who has created artwork for a number of anthologies and picture books, including Let It Shine: Stories of Black Women Freedom Fighters by Andrea Davis Pinkney, and I, Too, Sing America: Three Centuries of African American Poetry by Catherine Clinton. He lives in Cambridge, New York. Visit Stephen Alcorn at alcorngallery.com.

“Easily accessible . . . with a context specifically geared to those less knowledgeable about the historical period.”—The Bulletin
“Few students realize Lincoln’s contributions to our understanding of nationhood and freedom, and Meltzer’s analysis, based on solid historical scholarship, will help them see the scope of those contributions . . . A good addition to any library.”—School Library Journal