The Sugar King of Havana: The Rise and Fall of Julio Lobo, Cuba's Last Tycoon (Paperback) 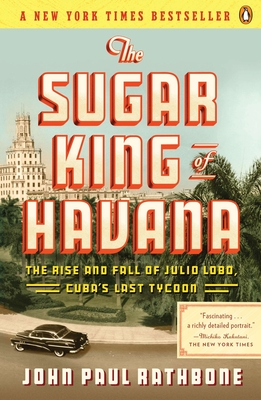 By John Paul Rathbone
$18.70
Not currently available - email or call for details

Known in his day as the King of Sugar, Julio Lobo was the wealthiest man in prerevolutionary Cuba. He had a life fit for Hollywood: he barely survived both a gangland shooting and a firing squad, and courted movie stars such as Joan Fontaine and Bette Davis. Only when he declined Che Guevara's personal offer to become Minister of Sugar in the Communist regime did Lobo's decades-long reign in Cuba come to a dramatic end. Drawing on stories from the author's own family history and other tales of the island's lost haute bourgeoisie, The Sugar King of Havana is a rare portrait of Cuba's glittering past—and a hopeful window into its future.

John Paul Rathbone was born in New York and raised in England. Currently the Financial Times' Latin American editor, and a former editor of the FT’s prestigious “Lex” column, he is a graduate of Oxford and Columbia Universities, and has worked as an economist at the World Bank, and as a journalist. His articles have appeared in many publications including The Wall Street Journal, Britain’s Sunday Telegraph, Colombia’s El Espectador and Esquire magazine, where he was business columnist from 2002-2003. He lives in London.