The Solitudes: A Dual-Language Edition with Parallel Text (Paperback) 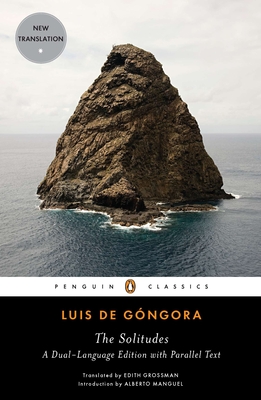 An epic masterpiece of world literature, in a magnificent new translation by one if the most acclaimed translators of our time

A towering figure of the Renaissance, Luis de Góngora pioneered poetic forms so radically different from the dominant aesthetic of his time that he was derided as "the Prince of Darkness." The Solitudes, his magnum opus, is an intoxicatingly lush novel-in-verse that follows the wanderings of a shipwrecked man who has been spurned by his lover. Wrenched from civilization and its attendant madness, the desolate hero is transported into a natural world that is at once menacing and sublime. In this stunning edition Edith Grossman captures the breathtaking beauty of a work that represents one of the high points of poetic achievement in any language.

Luis de Góngora (1561-1627) is among the most prominent figures of the Spanish Golden Age.

Edith Grossman (translator) is the acclaimed translator of Don Quixote, as well as books by Gabriel García Márquez, Mario Vargas Llosa, and Carlos Fuentes. She is the recipient of the inaugural Queen Sofia Spanish Institute Translation Prize, the PEN/Ralph Manheim Medal for Translation, the Ottaway Award for the Promotion of International Literature, and a Guggenheim fellowship.

Alberto Manguel (introducer) is the bestselling author of dozens of books, including A History of Reading and The Dictionary of Imaginary Places.

“In her brilliant new translation of The Solitudes, Góngora’s impossible masterpiece, Edith Grossman gives us the full measure of both his genius and his weirdness.” —The New Criterion


“Remarkably lucid . . . [Grossman's] lines often achieve a mesmerizing shimmer. . . . Reading Góngora is like traveling by hot-air balloon- you'll get somewhere eventually, but all the pleasure is in the elevation (and occasional vertigo). . . . It's hard to imagine a better effort to capture [this] poem.” —The New York Times Book Review


“Edith Grossman has surpassed even her magnificent version of Don Quixote by the far more difficult translation of Góngora's Solitudes. Few European poems are as sublime as The Solitudes, and Grossman illuminates this truth.” —Harold Bloom


“This is true alchemy: to change the gold of one language into the gold of another. Such things are miracles: the baroque architecture of Góngora's poem has been given a shining equivalent in twenty-first-century English through the art of Edith Grossman.” —Cees Nooteboom


“In Latin America, Góngora influenced much of the writing of Sor Juana Inés de la Cruz, of Borges, and (in lesser measure) of Gabriel García Márquez. Above all, he is the 'origin and source' of the great Cuban literature, that of Alejo Carpentier, Severo Sarduy, and Lezama Lima. In Spain he became the precursor of the best poets of the early twentieth century, from García Lorca to Luis Cernuda. Perhaps, in the brilliant translation of Edith Grossman, he might have a similar effect.” —Alberto Manguel, from the Introduction


“The Solitudes is the most refreshing poem of seventeenth-century European literature, and Góngora is the seventeenth century's Picasso, a rebel fountain that makes new water out of old. Edith Grossman's translation is the river that carries this new water across centuries and continents, and that allows us to drink of Góngora's genius.” —Joaquín Roses, University of Córdoba


“Luis de Góngora was one of the great surprises of the Spanish Renaissance. He proved to be a poet of world stature, a figure comparable, say, to John Donne and George Herbert in English and a wildly imaginative and deeply rewarding poet of the senses. Edith Grossman has splendidly brought his Solitudes to life in English.” —Edward Hirsch