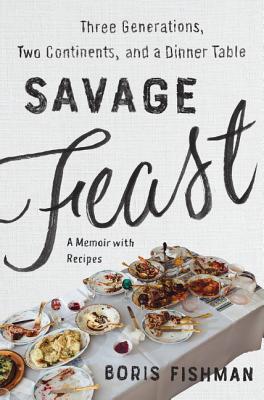 By Boris Fishman
$30.79
Not currently available - email or call for details

One of Booklist's Must Read Nonfiction picks of 2019

The acclaimed author of A Replacement Life shifts between heartbreak and humor in this gorgeously told, recipe-filled memoir. A family story, an immigrant story, a love story, and an epic meal, Savage Feast explores the challenges of navigating two cultures from an unusual angle.

A revealing personal story and family memoir told through meals and recipes, Savage Feast begins with Boris’s childhood in Soviet Belarus, where good food was often worth more than money. He describes the unlikely dish that brought his parents together and how years of Holocaust hunger left his grandmother so obsessed with bread that she always kept five loaves on hand. She was the stove magician and Boris’ grandfather the master black marketer who supplied her, evading at least one firing squad on the way. These spoils kept Boris’ family—Jews who lived under threat of discrimination and violence—provided-for and protected.

Despite its abundance, food becomes even more important in America, which Boris’ family reaches after an emigration through Vienna and Rome filled with marvel, despair, and bratwurst. How to remain connected to one’s roots while shedding their trauma? The ambrosial cooking of Oksana, Boris’s grandfather’s Ukrainian home aide, begins to show him the way. His quest takes him to a farm in the Hudson River Valley, the kitchen of a Russian restaurant on the Lower East Side, a Native American reservation in South Dakota, and back to Oksana’s kitchen in Brooklyn. His relationships with women—troubled, he realizes, for reasons that go back many generations—unfold concurrently, finally bringing him, after many misadventures, to an American soulmate.

Savage Feast is Boris’ tribute to food, that secret passage to an intimate conversation about identity, belonging, family, displacement, and love.

Boris Fishman was born in Minsk, Belarus, and emigrated to the United States in 1988. His work has appeared in the New Yorker, the New York Times Magazine, the New York Times Book Review, Travel + Leisure, the London Review of Books, New York magazine, the Wall Street Journal, and the Guardian, among other publications. He is the author of the novels A Replacement Life, which was a New York Times Notable Book of the Year and winner of the VCU Cabell First Novelist Award and the American Library Association’s Sophie Brody Medal, and Don’t Let My Baby Do Rodeo, which was also a New York Times Notable Book of the Year. He teaches in Princeton University’s Creative Writing Program and lives in New York City.

“A tightly written page-turner about the author’s childhood in Minsk, his extended family and their odyssey from Belarus to New York (via Vienna and Rome in the 1980s) as well as his efforts to conquer his own demons. While reading it, I was frequently tempted to head to the kitchen and fry some onions, the step that starts many of the Eastern European recipes in his book.” — Florence Fabricant, New York Times, “Front Burner”

“Terrifically nuanced and multidimensional…I’ve been reading every food memoir available, including those by Anthony Bourdain, Gabrielle Hamilton, Ruth Reichl, Michael Pollan, Samin Nosrat, Michael Twitty, and now Boris Fishman. His is the most focused and most multilayered of these wonderful books.”   — Panthea Reid, Philadelphia Inquirer

“As Fishman suggests with this profusion of stories, all feasts are savage, in the sense that cuisine, like culture, is ultimately wild, feral, untamed.” — Paste

“Fishman’s writing is brisk and vivid, and despite generations’ worth of trauma the family suffered, from pervasive anti-Semitism to the brutalities of World War II, his memoir is often funny... This book departs from other memoirs: Most chapters end with detailed recipes, adding a lovely, homey dimension.” — BookPage

“This beautifully written memoir is a wonderful story about family, love, and connecting with your roots.” — Library Journal

“This rich, memorable exploration of immigrant identity, culture clash and Soviet cuisine will linger long after the book has been closed or the last of the dishes within have been served.” — Shelf Talker

“If you aren’t hungry when you start reading this book, you will be by the time you’ve finished.” — Bookish