The Best at It (Paperback) 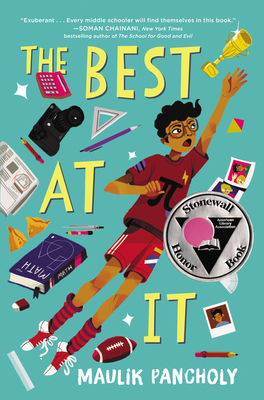 From award-winning actor Maulik Pancholy comes a hilarious and heartfelt middle grade debut about a gay Indian American boy coming into his own. One of Time Out's “LGBTQ+ books for kids to read during Pride Month,” this is perfect for fans of Tim Federle’s Nate series. A Stonewall Honor Book!

Rahul Kapoor is heading into seventh grade in a small town in Indiana. The start of middle school is making him feel increasingly anxious, so his favorite person in the whole world, his grandfather, Bhai, gives him some well-meaning advice: Find one thing you’re really good at and become the BEST at it.

Those four little words sear themselves into Rahul’s brain. While he’s not quite sure what that special thing is, he is convinced that once he finds it, bullies like Brent Mason will stop torturing him at school. And he won’t be worried about staring too long at his classmate Justin Emery. With his best friend, Chelsea, by his side, Rahul is ready to crush this challenge.... But what if he discovers he isn’t the best at anything?

Funny, charming, and incredibly touching, this is a story about friendship, family, and the courage it takes to live your truth.

Maulik Pancholy is an award-winning actor whose career has spanned hit television shows (30 Rock, Whitney), animated favorites (Phineas and Ferb, Sanjay and Craig), the Broadway stage, and films. He served on President Barack Obama’s Advisory Commission on Asian Americans and Pacific Islanders, and he is the cofounder of the anti-bullying campaign Act to Change. Maulik lives in Brooklyn, New York, with his husband, Ryan, and his dog, T-Rex. The Best at It is his debut novel.

“Rahul is a compelling protagonist... Hand this to middle grade readers who are navigating changing social dynamics as they come of age.” — School Library Journal

“An emotional, earnest, and genuine journey to self-love that had me crying, laughing, and cheering. Hilarious and heartbreaking and truly touching—I wanted nothing more than to reach through the pages and give Rahul a big hug for being brave, determined, and the best that he can be.” — Kacen Callender, Stonewall Award-winning author of Hurricane Child

“A funny, fun, big-hearted book filled with characters to adore. Rahul’s journey toward learning to stand up for himself and finding his place in the world is achingly emotionally authentic and deeply resonant. This novel is a joy from beginning to end.” — Anne Ursu, award-winning author of Breadcrumbs and The Lost Girl

“Exuberant... Every middle schooler will find themselves in this book.” — Soman Chainani, New York Times bestselling author of the School for Good and Evil series