The Boys in the Bunkhouse: Servitude and Salvation in the Heartland (Hardcover) 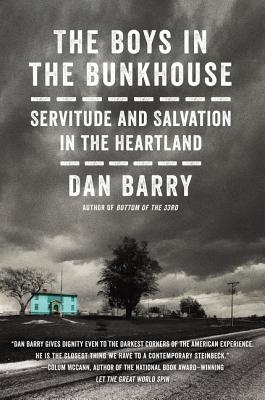 By Dan Barry
$29.69
Not currently available - email or call for details

Nominated for the 2017 Hillman Prize and the Robert F. Kennedy Human Rights Award

With this Dickensian tale from America’s heartland, New York Times writer and columnist Dan Barry tells the harrowing yet uplifting story of the exploitation and abuse of a resilient group of men with intellectual disability, and the heroic efforts of those who helped them to find justice and reclaim their lives.

In the tiny Iowa farm town of Atalissa, dozens of men, all with intellectual disability and all from Texas, lived in an old schoolhouse. Before dawn each morning, they were bussed to a nearby processing plant, where they eviscerated turkeys in return for food, lodging, and $65 a month. They lived in near servitude for more than thirty years, enduring increasing neglect, exploitation, and physical and emotional abuse—until state social workers, local journalists, and one tenacious labor lawyer helped these men achieve freedom.

Drawing on exhaustive interviews, Dan Barry dives deeply into the lives of the men, recording their memories of suffering, loneliness and fleeting joy, as well as the undying hope they maintained despite their traumatic circumstances. Barry explores how a small Iowa town remained oblivious to the plight of these men, analyzes the many causes for such profound and chronic negligence, and lays out the impact of the men’s dramatic court case, which has spurred advocates—including President Obama—to push for just pay and improved working conditions for people living with disabilities.

A luminous work of social justice, told with compassion and compelling detail, The Boys in the Bunkhouse is more than just inspired storytelling. It is a clarion call for a vigilance that ensures inclusion and dignity for all.

Dan Barry is a reporter and columnist for the New York Times. In 1994 he was part of an investigative team at the Providence Journal that won the Pulitzer Prize for a series of articles on Rhode Island’s justice system. He is the author of a memoir, a collection of his About New York columns, and Bottom of the 33rd, for which he won the 2012 PEN/ESPN Award for Literary Sports Writing. He lives with his wife and two daughters in Maplewood, New Jersey.

“Barry’s book can’t right all those wrongs, but it at least documents them eloquently, and in a more permanent way.” — Kansas City Star

“An extraordinary contribution to the literature of social injustice. . . . The Boys in the Bunkhouse surely will emerge as one of the landmark books of the year.” — Providence Journal

“The Boys in the Bunkhouse is not just a book about the victims but also a book that turns those victims into real men. Dan Barry has written them into history, as only a journalist could.” — Newsweek

“An important story about the horrors of slavery and exploitation that can happen to vulnerable people anywhere.” — The Atlantic

The story of these men gets the full telling it deserves in Dan Barry’s powerful, moving, and at times heartbreaking book, The Boys in the Bunkhouse.” — Commonweal Magazine

“Dan Barry gives dignity even to the darkest corners of the American experience. He is the closest thing we have to a contemporary Steinbeck.” — Colum McCann, author of the National Book Award-winning Let the Great World Spin

“Dan Barry represents the magic that is possible in journalism when there is a convergence between a great story and great talent.” — Gay Talese

“Hard-hitting journalism shot through with flourishes of the best literary nonfiction. . . . The Boys in the Bunkhouse is, ultimately, a hopeful story of the power of a few dogged individuals to make change.” — Minneapolis Star Tribune

“As an exposé of a moral catastrophe, this is a vital piece of reportage.” — New York Times Book Review

Praise for Bottom of the 33rd:
“What a book—an exquisite exercise in story-telling, democracy and myth-making that has, at its center, a great respect for the symphony of voices that make up America.” — Colum McCann

“A fascinating, beautifully told story... In the hands of Barry, a national correspondent for the New York Times, this marathon of duty, loyalty, misery and folly becomes a riveting narrative...The book feels like ‘Our Town’ on the diamond.” — Minneapolis Star Tribune

“An astonishing tale that lyrically articulates baseball?s inexorable grip on its players and fans, Bottom of the 33rd belongs among the best baseball books ever written.” — Cleveland Plain Dealer

“[Dan] Barry does more than simply recount the inning-by-inning-by-inning box score. He delves beneath the surface, like an archaeologist piecing together the shards and fragments of a forgotten society, to reconstruct a time and a night that have become part of baseball lore.” — Associated Press