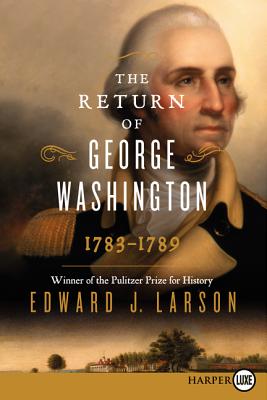 By Edward J. Larson
$32.99
Not currently available - email or call for details

Pulitzer Prize-winning historian Edward J. Larson recovers a crucially important—yet almost always overlooked—chapter of George Washington’s life, revealing how Washington saved the United States by coming out of retirement to lead the Constitutional Convention and serve as our first president.

EDWARD J. LARSON received the Pulitzer Prize for History for Summer for the Gods: The Scopes Trial and America’s Continuing Debate over Science and Religion. He is the co-author of Modern Library’s The Constitutional Convention: A Narrative History from the Notes of James Madison and author of The Return of George Washington: Uniting the States, 1783-1789, and A Magnificent Catastrophe: The Tumultuous Election of 1800. He was an inaugural fellow at the National Library for the Study of George Washington. Larson is University Professor of History and holds the Hugh & Hazel Darling Chair in Law at Pepperdine University. He travels widely as a media commentator, visiting instructor, and guest speaker.